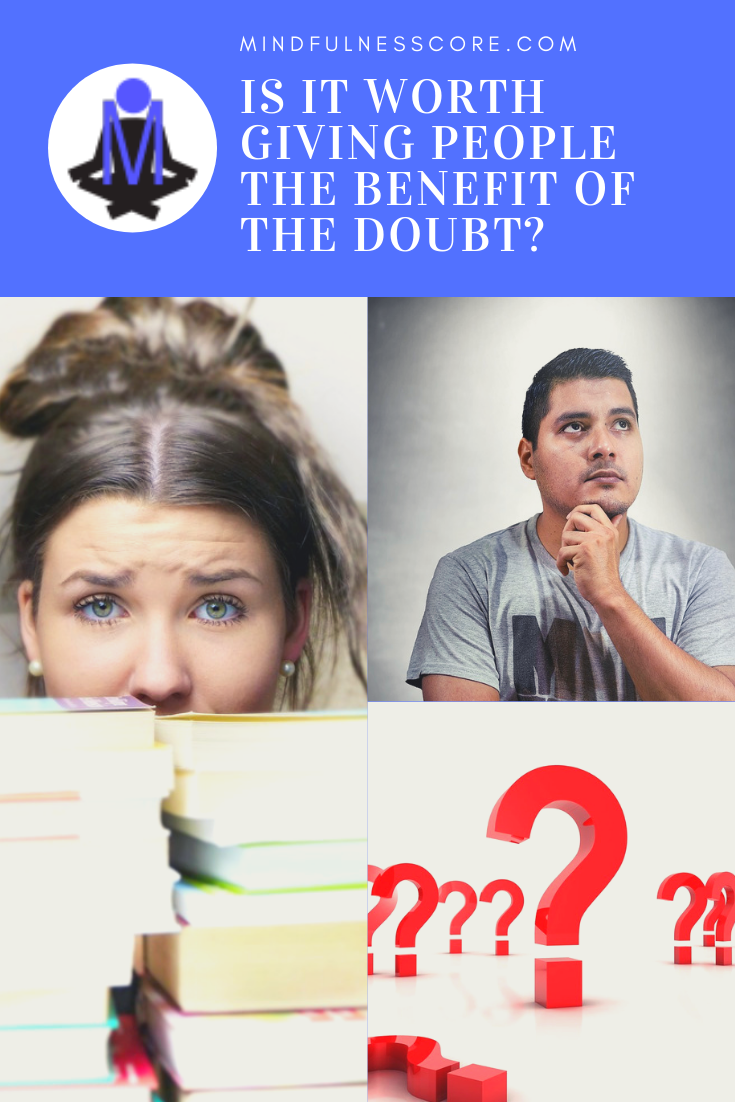 The problem with giving people the benefit of the doubt is that you risk yourself being taken for granted. In an off chance that you have been confronted with a person who is in search of an opportunity to exploit you, giving the benefit of the doubt can present you as gullible. While it may be a great virtue in its true essence, such a risk makes you lose your confidence in practicing it more with people, especially when you don’t know them from eve.

Your Past Does Not Shape Your Future

Your past experiences have a way of sensitizing your brain into expecting the worst under all circumstances. As mentioned earlier, it is kind of a defense mechanism that is aimed at protecting you against getting hurt again. Failure to give people the benefit of the doubt because you have been used and hurt in the past has a potential to evolve with the passage of time and turn into what is commonly referred to as the “trust issues”.

The first and the foremost reason to give people the benefit of the doubt, therefore, is to protect yourself from falling into the ditch of the trust issues and let it ruin your personal and professional life. In all honesty, your past does not determine your future in any way. Just because you’ve had the negative experiences with people in the past does not imply that you are always going to meet the same kind of people throughout your life. Just because you have been lied to in the past doesn’t mean that you are still being lied to. The phrase “benefit of the doubt” implies that you are not too sure of what actually happened either. Under such circumstances, there is always room to believe what you are being told since the probability of the person actually telling the truth is exactly 50%. It is only your negative experiences of the past which push you into believing the worst.

No One Is Perfect

Choosing to never give others the benefit of the doubt is only justified if you are 100% sure that there has not been an instance in your entire life when you committed a mistake. Truth is, we are all human beings and as such, making mistakes is an innate part of us. What matters is to realize if the person had an intention to do what he did or was it only the circumstances or the timely situation that pushed him into doing that. When you are in doubt yourself and are not too sure of what happened or why did it happen, there is always a possibility that your mind is tricking you into believing the worst while there actually is an alternative explanation. Once you clear your head and focus on what is being told, you can easily start to realize that the explanation does make more sense than the worst case scenario that you had developed in your mind. More often than not, we are not much different from other people. If we were faced with similar circumstances and had identical knowledge and experiences, it is likely that we would do the same as they did. This is what further justifies practicing giving people the benefit of the doubt.

You Learn To Forgive Yourself

Here’s the thing; as per psychology, you are always going to fail miserably to forgive yourself for your own mistakes if you haven’t had any practice with forgiving other people for their mistakes, the mistakes that have inflicted harm on yourself in some way. If you show them the leniency and give them the benefit of the doubt, it is easier for you to stop beating yourself up for your own mistakes as well. Otherwise, you continue on a path to severe frustration because you fail to meet those standards yourself that you have created for other people. It ends up being a kind of competition for yourself where you constantly have to put an effort into meeting the standards. Under such circumstances, you start to feel severely exhausted after a while. In simpler terms, if you can learn to be gentle with other people, it will be far more convenient for you to be gentle with yourself as well. Giving people the benefit of the doubt, therefore, enables you to master the art of forgiveness. Even when you don’t completely agree with them or you are not entirely sure if they are telling you the truth, making a choice to trust them enables you to avoid being a hypocrite and maintain the same lenient, more humane standards for yourself as well as for the rest of the people.

The Path To Positivity

As discussed before, the primary reason why you find it hard to give people the benefit of the doubt is that you have been sensitized into believing the worst. Be it your past experiences or the people that crossed your path, your entire outlook has been turned severely negative. Making an effort and pushing yourself into giving people the benefit of the doubt, therefore, enables you to transform your outlook of the world and teaches you again to see the positivity around you. If you think about it, giving people the benefit of the doubt is synonymous to having a positive outlook. You are essentially choosing to believe that someone is telling you the truth and that people are good at heart as against believing the worst that you are being lied to and that the person has a negative personality in the first place. In other words, practicing giving the benefit of doubt fills you up with positivity that opens new doors of happiness and satisfaction in your life.

When To Give People The Benefit Of The Doubt?

This brings us to the most important question of when is it suitable to give people the benefit of the doubt. Remember that we are not, in any way, supporting being gullible, a pushover, or entirely ignoring your gut feelings. There are times when it is a virtue to give people the benefit of the doubt while at other times, it is better to be confident of your existent knowledge of the person or the scenario or to let your hunch come to the foreground. For instance, if you have met someone new and your date failed to show up on time on your first date, it is wise to give them the benefit of the doubt and believe when they tell you that they were stuck in traffic, etc. However, if you have been multiple experiences with someone and you already know that they lack commitment and are always late to show up, it is justified for you to not give them any room to relish the benefit of the doubt and call them on their lame excuses. In simpler terms, if you are not familiar with the person or the scenario, it is usually a better option to practice giving the benefit of the doubt. But if your existent knowledge and experiences are substantial regarding the person or scenario, there is nothing wrong with listening to your gut feeling.

As evident from the aforementioned information, if practiced correctly, giving people the benefit of the doubt is a great virtue. There are plenty of reasons why it is justified for you to learn and practice this art with a few significant benefits that you get to relish in return as well. The most important thing is to make yourself capable of realizing when it’s justified and when is it synonymous to being gullible or a pushover.

Now that you know the reasons why you should give people the benefit of the doubt, you would perhaps be able to override the innate response of your mind to expect the worst at all times. With persistence and effort, you would certainly be able to remove such negativity out of your mind once and for all. Start practicing it today and see the difference for yourself.