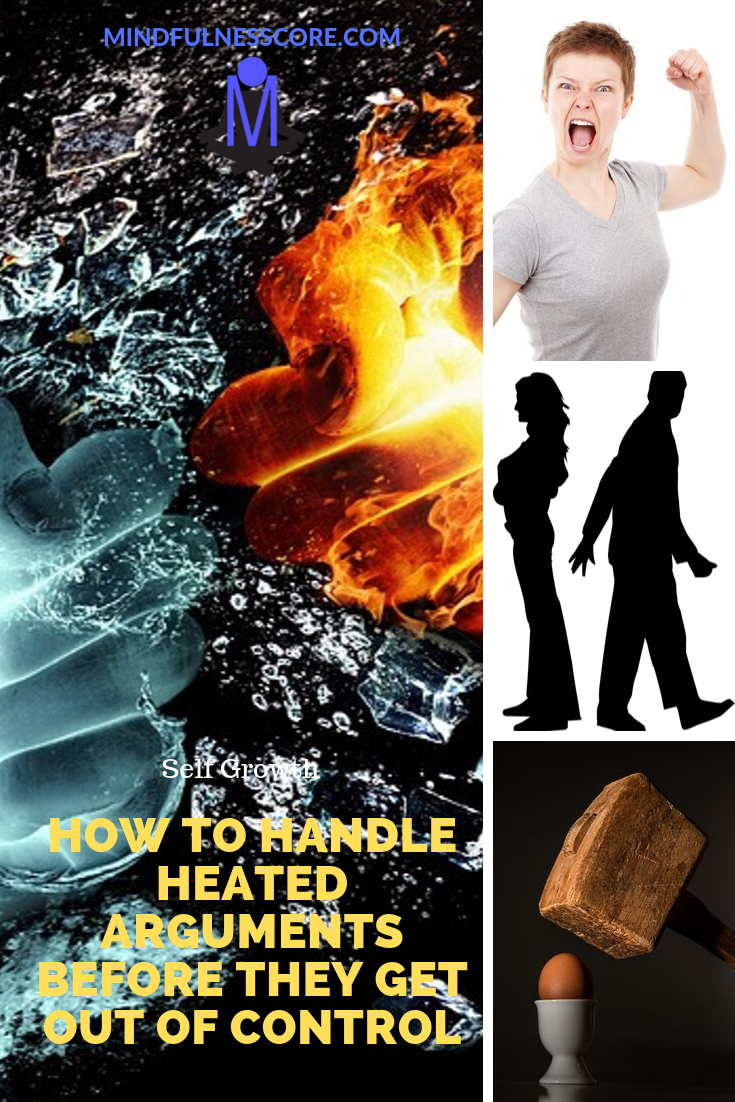 Our lives are becoming faster-paced than ever before. Having a hectic schedule and a busy routine throughout the week is the new normal. Despite your mind being unparalleled in terms of its functional capacity, there are, nonetheless, limitations to what it can handle. When there’s so much on your mind already, it is not always convenient to handle an argument amicably. Arguments are a part of our lives. Be it an argument in the workplace or at home with your partner. As long as you are surrounded by people, you are going to have arguments from time to time.

There is no argument over the fact that arguments are unpleasant. Be it because of the guilt or embarrassment that you feel for saying things that you shouldn’t have, or the physical sensation of anger that is commonly accompanied by the arguments. The good news is that if you are willing to put an effort, you can make yourself capable of handling the heated arguments before they spiral out of control. While it may be a gross oversimplification, but all you need to do under such circumstances is to stick to logic, say exactly what you mean, and extend your message while abiding by good manners and keeping your calm. Unfortunately, however, you are justified in thinking that it is easier said than done. But what if we told you that there are tips and tricks that you can employ in an attempt to make it convenient for you to manage the heated arguments? If you could learn to handle such arguments with peace, it might even turn into a skill that is worth putting into your resume.

So let’s dive into the top 5 tips that you can use to handle the heated arguments before they get out of control.

1. Focus On The Language

The first and foremost tip to manage the heated arguments either at your workplace or with your partner is to focus on your language. More often than not, we are unconsciously using words and phrases while having a disagreement that essentially works to fuel it. Perhaps you wouldn’t recognize, but your facial expressions or the gestures are sometimes enough to trigger the other person into getting hostile. Keeping a polite stance in terms of your language in an instance of an argument can help a great deal in reducing its intensity to a common disagreement.

For the purpose of highlighting a few examples, it has been tried and tested that being respectful towards the other person and making it prominent that you value that the perspective that he is put forward should be a good start. For instance, you can welcome the other person politely to an open and thorough discussion regarding the matter at hand. Highlight the importance of the issue and remind him how crucial it is to make a consensus regarding the matter. If you can foresee that the discussion is now turning into a heated argument, you can announce it upfront that you are getting uncomfortable with the turn that this discussion is taking and would like to work on it as a team.

The point to be remembered here is that just like you, the other person is craving respect and his thirst for being understood is making him stick to his stance. The moment you show respect to his opinion is the moment that he will lose the attitude and will be open for a discussion on this disagreement in a more civilized fashion.

2. Be A Good Listener

Think of a recent incident where you had an argument at the workplace or with one of your friends or family members. Don’t you think that you were triggered because it seemed like the other person was not interested in what you had to say? Wouldn’t the argument have been constrained much sooner and more calmly if only they were listening to your ideas and opinions? Now try to apply the same rationale while switching places with the other person. Just like you, the other person wants to know that you are listening to his opinion, find it valuable, and are showing respect to it. If you try to create your dominance over the discussion by pushing his words into the background, you are preparing yourself for a heated argument that is destined to go out of control.

A simple tip that has the potential to work like a charm in this regard is repeating or paraphrasing what the other person has said. Before you try to extend your own point or make an attempt to let the other person see why you are in disagreement to what he has said, it is recommended to repeat or paraphrase what he has said and then continue on to make your own point. This way, it creates an impression on him that he thoroughly listened and understood his message before you responded with your own. More often than not, being a good listener turns out to be a contagious as well. Once you show your colleague or your friend that you have properly listened to his message, it automatically sensitizes his brain to now listen to your message completely as well.

Once both the parties are listening to each other, understanding the perspective, and showing respect to it, it is more than likely that a heated argument will be diffused into a polite disagreement.

3. Don’t Be An Authoritarian

Imagine a moment when you are having a disagreement with your fiancé. She told you that she will be going out with her friends tonight. Your response, in return, was a cold “NO”. You did not associate your refusal with a rationale, you didn’t bother to come up with the reasoning for why you don’t want her to go with her friends, you didn’t explain anything, rather, tried bluntly to stop her from going for no apparent reason. How do you think your fiancé is going to respond to you? Don’t you think this is one of those instances which are destined to end up in a heated argument that’ll spiral out of control?

This is a lesson in the importance of elaborating your perspective. You can never win an argument or manage it effectively for that matter if you are not capable of delivering your message appropriately and with sufficient details. Letting someone know that you disagree with them is never sufficient. No one likes to be retaliated. A more practical skill would be to keep your calm and explain the reasons behind your disagreement. For instance, in the above example, instead of blurting out a “NO”, you could have molded your words and been more polite in letting her know that you have arranged a surprise date for her and you would really appreciate if she cancels her plan and stays with you tonight. With such a statement, you are depicting that you are not imposing your decision on her, you are not commanding her in any way, and are actually being very polite and humble in extending what can only be called as a request. Since your request is now associated with the reasons as well, it is almost guaranteed for her to not be offended by it.

4. Put An Effort Into Being Calmer

It is a common experience to be engaged in an argument that is being headed in a direction where you can foresee yourself ending up exploding. It is such arguments which end up making you feel guilty or embarrassed because you end up saying things that you didn’t mean. Under such circumstances, a simple yet effective strategy is to take a moment and make a deliberate effort into making yourself more calm and peaceful.

A few of the things which can help in restoring your peace is drinking a glass of cold water. It is also recommended to take a seat if you are standing during the course of the argument. Lastly, a few of the common practices of meditation can help a great deal in managing the argument. Of course, you are justified to think how awkward it will be if you started meditating all of a sudden in front of the person who was engaged in an argument with you. But that’s not the case. You don’t have to all-out meditate, all you need to do is perform the breathing exercise. Let the other person talk, take a seat, be silent, and start to take deep, slow breaths. Try to feel the air being filled into your body and then it rushing out as you start to slowly exhale. This simple exercise is known to restore the peace of your mind and stimulate the production of hormones which send the happy signals throughout the body. Once such sensations are running through your body, you are more than likely to avoid being aggressive while having an argument. Remember, the “heat” component of an argument is a two-way street. Any given argument can only be heated when both parties are interested in being aggressive. The moment either one of them chooses to be polite, the argument is diffused.

As mentioned earlier, if you can foresee that the argument is getting heated and is headed in a direction that is making you uncomfortable, it is recommended to excuse yourself from the argument for a time being. It’s never a good strategy to swim in a torrent. What’s practical is to sit by the side and wait for the stream to calm down. If the argument has been heated and you find it imminent for you to explode with a response, it’ll be an impeccable coping mechanism to be excused. You can simply tell the other person that you need a moment, or that you’ll be right back. There is no liability for you to respond to the argument right away. Think of it as the 1-minute course that is often taught as part of anger management. They’d tell you that it takes only 60 seconds for the sensation of anger to be produced, run through your body, and eventually escape out of it. If you can manage to keep yourself from responding through these 60 seconds, you won’t even have the required anger to make you explode.

Therefore, excusing yourself from the situation for a few moments, taking a break and evaluating your emotions can put you in a better position to diffuse the heated argument into a polite disagreement. It might come out as impolite or even rude for some people to leave right in the middle of the argument, but you have to be able to see the bigger picture here. It is always better to go away for a while rather than being a part of it until your mind has had enough and is ready to explode with an inappropriate response. In order to compensate for being impolite and leaving in the middle of the argument, you can take your time to cool yourself down and then return deliberately to the argument but in a much more civilized and mannered fashion this time around.

Be it your personal life or your professional life, you can’t expect to always avoid being in a heated argument. Wherever there are humans, there is always going to be arguments, it’s as simple as that. This is why it is important for you to learn to manage such arguments before they spiral out of control. The next time you have one with one of your colleagues, friends, or family members, try to keep the tips mentioned above in mind and apply them to witness their positive impact by yourself. If you succeed in diffusing the argument and generating a consensus with the other person, you will be doing a huge favor to your respect in the eyes of that person. It’s a personality trait that yells maturity and sensibility, which, let’s face it, a lot of people lack in this time and age.