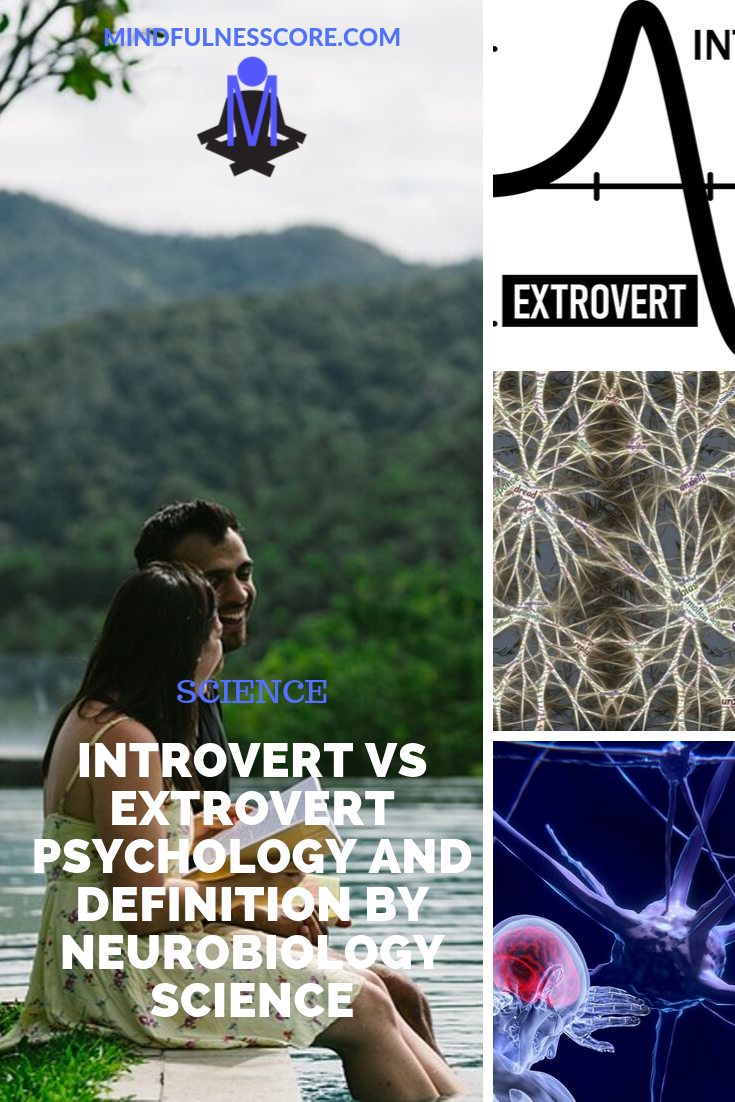 Would you identify yourself as an extrovert or an introvert? Isn’t it a question that we have all been asking and answering since the days of our early teenage? Whenever you talk about a personality type and the so-called tests and evaluations that are focused on identifying a person’s personality, the discussion about extroversion and introversion preferences always take up a huge chunk of the results. In the simplest of terms, it would be fair to state that whether you are an extrovert or an introvert, what it primarily hints at is your behavior and attitude towards people, things, and scenarios. Considering that we are referring to the parts of the personality which are entirely under the control of your brain, i-e, your behavior and attitude, it is understandable that there must be a neurobiological basis to whether a person is an extrovert or an introvert.

It can be taken for granted that for an average adult, the knowledge of whether he is an introvert or an extrovert is commonplace and so, you are highly likely to already be familiar with the type of personality that you have. But do you understand your brain chemistry? Are you informed about the way your brain is actually wired that manifests itself in the form of making you either an extrovert or an introvert? Such knowledge can help a great deal in an in-depth analysis of one’s own personality in hopes of understanding yourself better.

Before we dive into the discussion about the introvert vs. an extrovert brain, we would like to take this time and accentuate that it is a common misconception that introverts are likely to be more intelligent and cognitively at a benefit as compared to the extrovert. In all honesty, it is nothing but just that, a “MISCONCEPTION”. There has not been single research that supports the claim of an introvert being smarter than the extrovert. The differences between the two types of brains actually lie in the way they are activated in response to a bunch of different scenarios. It has been identified that a neurotransmitter known as Dopamine plays a crucial role in determining the introvert or extrovert preferences of an individual. Mind it that Dopamine is a neurotransmitter that has the authority over the reward and pleasure system of your brain.

If we were to ask you about the differences between an introvert and an extrovert, it is likely that all of you are going to have somewhat of a similar answer. For an introvert, you would highlight the characteristics such as that of being quieter. It is a common understanding that introverts derive their energy and overall vibe out of spending time in solitude and indulging in activities that they can carry out by themselves. While on the other hand, extroverts are usually characterized as being the center of attention. They are likely to derive their energy and overall vibe out of socializing and spending time with the people. They are usually louder and focused on people and experiences.

As such, an extrovert is usually seen as someone with charisma, charm, and an evolved sense of persuasion. On the other hand, introverts are commonly labeled as the creative types specifically the ones who are interested more in artistry. It is particularly useful for them since various forms of art enable the introverts to express their inner selves in solitude without having to indulge in excessive social connections.

What needs to be realized, however, is that things aren’t as black and white as you would want them to be. The truth of the matter is that none of us can be expected to be one hundred percent extrovert or an introvert. Somewhere deep in our minds, we all have a blend of an introvert as well as extrovert qualities. It is defined by the individual circumstances as to which of these qualities are brought to the foreground. For instance, you may identify yourself as an extrovert and yet, if you have been partying for the whole weekend with your close friends, it is expected of you to want to take a break on Monday. While on a break, you would probably want to stay in for the night and read a good book or perhaps watch your favorite TV show on Netflix with a bag of chips. The latter is a scenario that is usually associated with the introverts and yet you would want to adopt this for a day or two every now and then while having extroversion as a dominant component of your personality.

Similarly, introverts may enjoy their time alone and activities that they can indulge in all by themselves, but it doesn’t imply that they are awkward or nervous in any way in a social setting. Socializing is a basic need for all of us. Introverts may not be the center of attention in social settings, but they can be quite charming socializers especially with the people that they are close with. It is not an uncommon sight for an introvert to be found having a good time with a group of people that they feel comfortable with. All in all, being an introvert doesn’t in any way suggest that you are always going to be in your hermit mode while being an extrovert doesn’t mean that you would not sometime prefer to get away from your colleagues and take some time alone to ponder over the ideas that pop into your mind.

What Does Science Have To Say About The Extrovert And Introvert Personalities?

According to a theory put forward by Hans Eysenck, a famous psychologist in the early 1960s, the major difference between an extrovert and an introvert personality is in a feature that was labeled as “Arousal”. It was theorized that due to lower arousal in the extroverts, they are the ones more likely to go in pursuit of challenges and risks. This was also presented as the basis of why extroverts prefer social settings since they are focused on people and experiences in an attempt to find the stimulation required to compensate for the lack of arousal. On the other hand, introverts were characterized as the ones with a comparatively higher level of arousal. Thanks to their natural overstimulation in this regard, they are likely to get away from the crowd and spend some time in solitude in hopes of managing and adjusting their overstimulation effectively. This was presented as the basis of why introverts prefer the settings such as that of their own house, libraries, or parks where they can get closer to nature but away from social interactions.

This theory has been the basis of neuropsychological research that has focused intensely on understanding the differences between the minds of an extrovert and an introvert. In the year 2005, a study was formed based on the same notion that aimed to elaborate on the difference in terms of Dopamine. Dopamine is a neurotransmitter that is primarily involved in managing the inbuilt reward system of the brain among other versatile functions. It was reported that this reward system was stimulated and activated differently in the mind of an extrovert as compared to that of an introvert.

As part of the study, participants were required to indulge in a gambling task. With favorable outcomes of gambling, it was reported that two of the brain regions namely the nucleus accumbens and the amygdala responded particularly more fiercely in case of an extrovert as compared to that of an introvert. This was presented as the basis of how reward and surprise are manifested differently in an extrovert than in an introvert. The conclusion that extroverts are more likely to appreciate the challenges, risks, and adventures were drawn from this experiment since if their brains responded strongly to gambling, it was likely that it will do the same in case of the other mentioned experiences as well.

An important thing to realize, however, was that the difference wasn’t as simple as introverts having comparatively lesser dopamine in their brains as compared to extroverts. The difference actually lied in the activity of Dopamine. Going to a concert, getting a date with the crush, getting a promotion, taking a risk, facing a challenge, going on an adventure, etc. were all experiences that were likely to energize the extrovert brain. It was further discovered that the neurotransmitter that takes the spotlight in the introvert brain is acetylcholine instead of dopamine. This neurotransmitter is also closely linked with the feelings of pleasure and reward, however, the experiences which activate acetylcholine are different. Finding time to ponder over things or ideas, or focusing on a task for an extended period of time to get it done up to perfection were the kinds of experiences that enabled an introvert to find pleasure and reward due to stimulation of acetylcholine neurotransmitter in their brain. The fact that dopamine was the prominent neurotransmitter for the extrovert while it was acetylcholine for an introvert also enabled the researchers to explain why extroverts are likely to find the social settings more appealing while the introverts would prefer solitude and activities that they can enjoy alone.

A study performed at the prestigious Harvard University in 2012 furthered the neurobiological research on the differences between extrovert and introvert minds. It was reported that the prefrontal cortex of an introvert’s brain was likely to have thicker as well as larger gray matter. The extroverts, on the other hand, inclined more towards relatively lesser gray matter in this region as compared to the introverts. Remember that the prefrontal cortex is a particular component of the brain that is most closely linked with the process of decision making and abstract thoughts. This was presented as the basis why Introverts find it more comfortable for themselves to look for a silent corner to evaluate their options and how events could unravel in response before finalizing their decision. In other words, this was thought of as one of the reasons why Introverts usually take their time to plan their actions thoroughly. On the other hand, the same feature turned the extroverts in the kind of personality who would rely on the feelings and emotions of the moment to take action without thorough planning and be comfortable with whatever challenges are thrown their way. What needs to be realized, however, is that both the type of personalities continued to have their unique charm and there were pros and cons associated with both types depending on the individual circumstances.