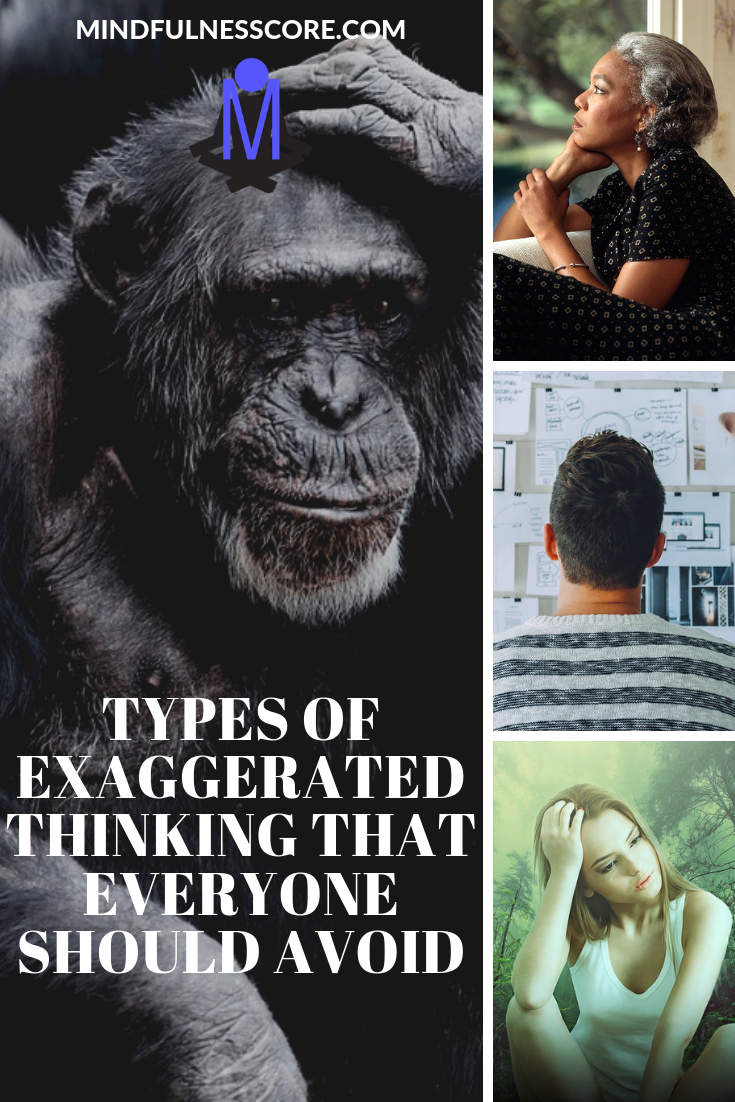 Exaggeration sounds evil, but it is not always so. There are numerous occasions in our day to day lives when we exaggerate things without any negative impact at all. For instance, remember the time when you wanted your friends to know that funny incident that happened to you while you were commuting to work in the morning? You exaggerated the story a little bit just to add up the spice and make it funnier. Everyone had a good laugh and if anything, exaggeration turned out to be a virtue for you as it enabled you to put a smile on their faces.

However, call it a side effect of a lasting exposure to a high-stress environment, there are people who have a natural proclivity to completely lose it every time something minor comes up. It’s hardwired into their genes to treat everything as if it were the end of the world. Truth it, experiencing stress and frustrations is common to all of us. But exaggerating such episodes is what causes an unnecessary drama in our own lives as well as in the lives of the people around us.

Remember that being playful with such exaggerations can do the same harm in the long run. You may take it lightly for now thinking that you are joking, but over a period of time, it feeds it in your subconscious and make it an inherent part of your personality. Before you know it, things will get out of control and you will start exaggerating all of your experiences by no conscious effort.

It’s rather unfortunate that turning anthills into mountains is the new norm in this time age. The daily stress and the associated drama of our lives have made us so addicted to it that we can’t help but look for one even when there isn’t any for a time being. This is perhaps what makes exaggeration a common response for the people of today. Common everyday stress is not regarded as just stress anymore but has rather turned into an “OMG, I’m so depressed”. The existence of headaches has almost vanished because apparently everyone has migraines these days. Having a headache is so old-fashioned.

But if you have recently started to be tired of all the drama, here are the top three types of exaggerated thinking that you must avoid in order to get rid of unnecessary stress, frustration, and drama in your life.

This Is What Always Happens

This is a type of exaggerated thinking that is commonly referred to as overgeneralizing in psychology. As the name suggests, it refers to the scenarios when you take a current event and generalize it to all of your past experience. For instance, you had to get to work a little earlier than usual for an important meeting. You did everything right and left home a little early as well, but got stuck in traffic and by no fault of your own, you got late for work, nonetheless. And that’s when the overgeneralizing made an appearance with a statement like, “It is exactly what happens to me, always”.

The primary reason behind such exaggerated thinking is because you have sensitized your brain into focusing on everything that has not turned out to be as per your expectations and not the good experiences that you’ve had in the past. It is important to fight the urge of such distorted thinking because it stirs up the level of stress in your life. A simple way to overcome such a thought is to take a moment and thoroughly analyze and evaluate your past experiences. Put a deliberate effort into thinking of a single instance in your entire life when such a mishap didn’t happen.

In the example above, try to think of the time when you had to get to work on time but you were already late as you left your house. Nonetheless, thanks to the cab driver who drove fast or the traffic that never got in the way, you still managed to get there on time. All you need is a single example that you can feed into your brain for it to realize that the exaggeration is not based on facts.

The End Of The World

Psychology calls this kind of exaggerated thinking “Catastrophizing”. It is a term used for scenarios when you are going through a down phase in your life which is just as temporary as all other experiences, but you would rather think of it as the “end of the world”. Such exaggerated thinking is derived from your tendency to give more importance to your life events than what they deserve. For instance, if you have just lost your job, it may seem like an unbearable hardship at the moment, but thinking that your world has ended because of it or that it is not within your power to find happiness ever again in your life is an exaggeration that is far from reality.

The fact of the matter is that our problems look gigantic in the present moment, but more often than not, when we take a look at them after a few days, weeks, or sometimes even months, that’s when we realize how insignificant they really were. In fact, it’s amazing to find out how great of a role those problems played in shaping your personality and putting your life on the right track. For instance, you thought your life has ended when you lost your job, but it only pushed you towards a better one; one that you have been searching for a long time.

Catastrophizing is harmful since it unnecessarily intensified your experience of stress. It makes the events and experiences more painful than they have to be and puts a toll on your mental health that can turn out to be dire in the long run. Why do you think so many people complaint of anxiety and depression these days? It’s primarily because catastrophizing has now become a trend.

In all honesty, it is not a lesson in the importance of being positive all the time. We understand that it’s impossible since people do go through some bad stuff in their lives. The lesson is just that of taking things for what they are and not turning every inconvenience into a tragedy.

One of the things which can turn out to be devastating for our personal and professional lives is a tendency to draw conclusions based on insufficient facts. When you overestimate what you know about a particular scenario, you put yourself at the risk of making a snap judgment.

For instance, imagine that you had a date with your partner. You got to the venue on time and have been waiting for 45 minutes but she hasn’t shown up yet. A snap judgment would make a range of disturbing thoughts in your mind including that she doesn’t want to see you, she’s not in love with you anymore, or worst, she’s cheating on you with someone.

Now if you take a step back and make a credible analysis of the situation, you would realize that the only information at your disposal at this moment is that of her being late. The rest of your conclusions are nothing but assumptions that you have drawn by yourself without taking the facts into consideration.

The aforementioned is a perfect example that highlights the kind of drama and unnecessary stress that such exaggerated thinking can put us through. What’s more is that it doesn’t confine itself to making us misread any given situation, but it actually fuels to act in a manner that plays a role in further worsening it as well.

The simplest solution to avoid jumping to conclusions is to make sure that you are basing it entirely on facts. Ask yourself if you have 100% of the information required to make such an assumption. If your conclusion is negative, put a deliberate effort into thinking of an alternative assumption that may prove you wrong as well. Unless you have substantial evidence to support your assumption, it is always better to discard it as it can prove out to be dangerous for your personal and professional life.

Excessive stress has already become an inevitable part of our lives. There is no need to accentuate it any further with the unnecessary drama that is caused by exaggerated thinking. You might have not noticed it before, but the minor episodes of exaggerations have been silently making its mark as an in-built component of your personality. Before you know it, the disastrous effects will begin showing up on your personal and professional life. If you would like to keep yourself protected against such harms, it is time that you started making an effort into getting rid of your exaggerated thinking. We have put the information at your disposal, now is your part to plan on implementing the tips that we have mentioned.